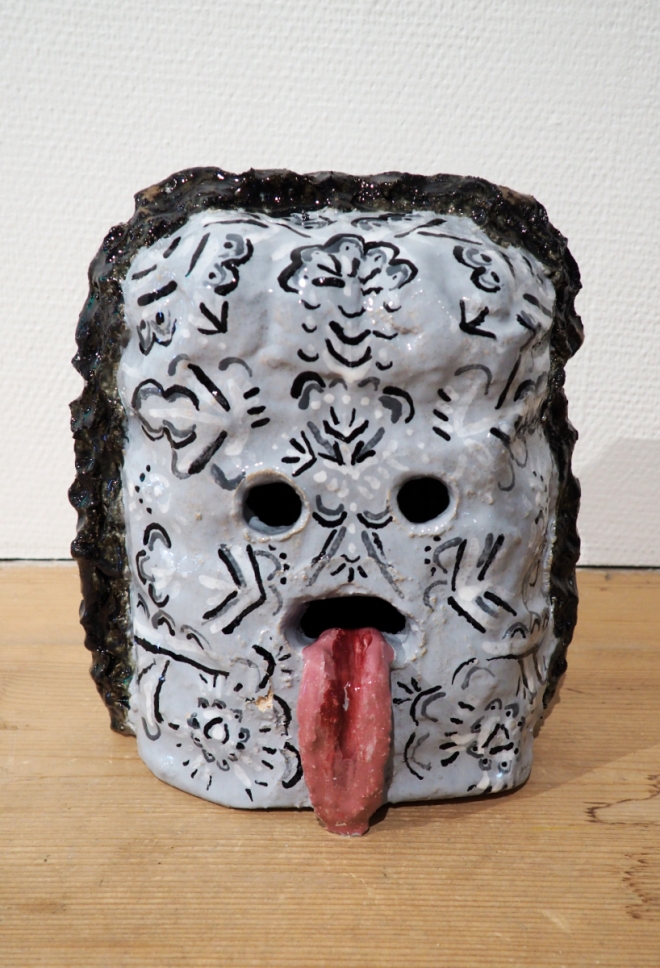 Stepping into Gallery Rantakasarmi, which is situated on Helsinki’s island fortress of Suomenlinna, posits one in altogether different kind of realm. The art works here speak of the past, the present and a future that potentially could have been, of strange customs and space travel, and protest marches, albeit ones that have been jazzed up with generous doses of glitter. The artists describe a tenuous world, a quirky place where circumstances are precarious, that holds secrets, demonstrates improbable coincidences and conveys an unexpected sense magic.

Jaroslav Kyša’s Alley (2018) and  Heaviness of Being (2017) capture attention for the way upend notions regarding gravity, pressure and the vulnerability of amorphous materials, such as glass and water. The former piece, a series of rectangular aluminum frames that appear to be leaning against each other and the wall, actually thwart that impetus. Closer inspection reveals that each is standing freely. Their only point of contact is with the floor. The latter work presents an equally unconventional set of circumstances. The glass supports an absurdly large piece of stone and contains a swirling, yet static, spiral of water. It raises questions regarding active and motionless states and what the connection between these elements might be.

Jarmila Mitríková & Dávid Demjanovič’s joint installation, which unites a selection masks (comprised of five ceramic objects and a painting) plus two additional paintings, blends aspects of vernacular architecture, peasant superstitions and ritual performance with facets of sports and space travel. The masks appear as objects of performance, a fact that is confirmed by the appearance of the mask-like painting and a ceramic mask in the painting Lunar Cult III (2019).

Lunar Cult III (2019) particularly stands it out for the way it incorporates diverse elements in a generic view of the Slovakian countryside setting. The tableau depicts performing gymnasts as a trio of individuals holding burning torches and wearing what could be student uniforms patiently stand before some outmoded kind of space vehicle. The smudged and runny paint, which has bled out across the wooden support in many places, contributes to the work’s generally antiquated and disfigured look.  The work is as gawky as it is biting. Artistically sharp lunacy abounds.

Ema Lančaričová’s photography excites for the way she embraces the industrial environment and explores it through the series Photography is utopia (2019). These works literally propel viewers on a voyage of discovery that  reveals the subject threw multiple perspectives. Using a model, sculptural viewing structures, video, loose B&W prints and light boxes, the series only leads to a consideration of the monolithic figure and the setting in which it appears, but also the various kind of photographic technology utilised. Despite the repetitive treatment of the subject’, the process of exploration never becomes arduous. The range of processes and formats  presents the subject in an unparalleled number of ways.

Out of this series, Photography is utopia 2 (2019) is particularly appealing. The black, wall-mounted and rectangular cone viewing frames housing circular and faded backlit images come across like some enchanting and archaic viewing device. Simultaneously isolating individual images and distancing the viewer from each, the objects project a nostalgic aura and beget curiosity that urges viewers to linger and reflect upon what they are seeing.

The tunnel-like character of Lančaričová’s Photography is utopia 2 is echoed in Pilát’s video A way to the moon (2018). The video plays deep inside a wooden crate set on the floor. But in terms of imagery, there’s a link with Mitríková & Demjanovič’s Lunar Cult III. Both works reference space travel and unremarkable rural locations. The outlook expressed in the video, though, is delightfully positive, if also a bit on the naive side, and portrays a fictive past in which leaders from opposing political realms collaborate to support a rocket journey to the moon.

The rocket, which blasts off from a partially snow blanketed field, seems dangerously close to a village, a community whose  church that, coincidentally, echoes the rocket’s shape. The absurdity of this deliciously improbable scenario hits a high note upon the release of the space capsule. The object – a stark black and white cab taken from a farm tractor – appears when the rocket’s power boosters disengage and then descends to the moon. The work implies: “Where there’s a will, there’s a way.” in a most captivating, somewhat cartoonish and dream-like way.

Michal Czinege’s striking painting installation Ghost in each room (2019) comprises a facsimile that visually and spatially reconfigures the gallery wall it references. The work, conceived as a trio of independent elements, projects the wall forward in a stepped arrangement to create an ambitiously complex and multi-layered synthesis of implied and real space. His canvases, for example, possess a diaphanous quality that insinuate that the area between the back of the painting and the wall are being revealed. Yet, that supposition is also groundless. Move around in front of the work and it quickly becomes apparent that the depicted architectural details do and do not align themselves with the wall’s actual features. What is perceived greatly depends on the viewer’s location.

Treading into the space occupied by the paintings and behind them exposes additional intricacies that deepen one’s comprehension of the work. At first this process invalidates the 2-dimensional, curtain-like character of the painted segments, as it shows that each panel also functions as one side of a discrete space. It is as if the artist has split the wall open to disclose a series of expanded interior volumes holding a range of unexpected manifestations, whose fluctuating nature gives rise to perplexity and surprise.

Sadly, the final selection of works stands as a post humous tribute to Kata Mach, who passed away during the planning stage of this exhibition. Her haunting, colourless canvases focus on protest, but with a twist. The blackness of the protesters garb and the darkness through which they march has been transgressed by the use of black sequins. This imbues them with an air typically assigned to luminaries attending some themed Soirée Gala.

Mach has described herself as an armchair anarchist, a person who rants and raves from the safety of the TV room. Her artistic commentary addresses the conventionalisation of such responses, of how they, having lost their sense of purposefulness and integrity, have become standard fodder for the news. But there is nothing conventional about the way she goes about illustrating this vacuity. An unusual form of beauty does pervade her work, especially the extended canvas delineates the protesters in the form of extended Rorschach. Their march appears to have evolved into a new species, a creature that disregards other values and acts on its inclinations.

The title of the exhibition is a mashup of the words utopia, dystopia and entropy. According to the project outline, Entrotopia is the point where these contrary forces converge, challenge each other and lead us to a more positive state of being. Whether this presentation actually accomplishes that is up to each viewer to decide. What it is certain is that it posits us at a fulcrum, a delicate point of balance from which things may go anywhere. What counters that from happening is the vitality of the artists’ contributions. It doesn’t matter that they might be dealing with agents subject to decay, exploring bankrupt ideologies or screwball notions of how to get to the moon. The intelligence and wit that underlies their work also brings with a sense of optimism that is difficult to resist.

Entrotopia 1.0 and Entrotopia 2.0 are ventures that spring from the artistic collaboration between Helsinki Artists’ Association, Finland and Publikum, Trnava, Slovakia.

This site uses Akismet to reduce spam. Learn how your comment data is processed.